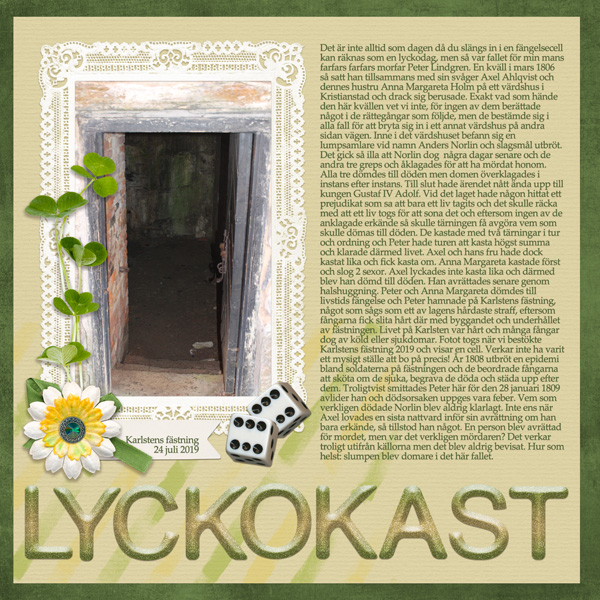 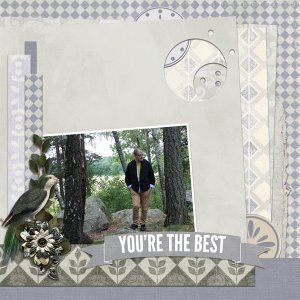 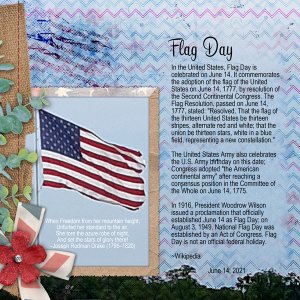 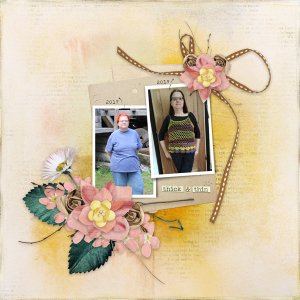 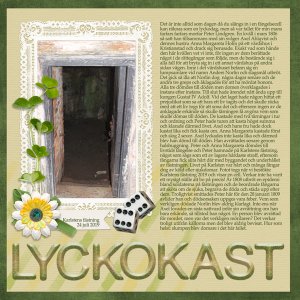 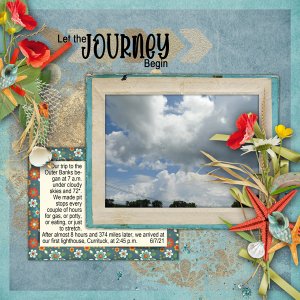 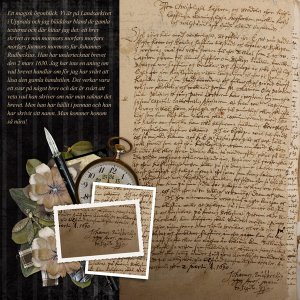 A Throw of the Dice

A bit morbid story perhaps, but genealogy leads you in any direction!
Click to expand...

Translation:
It's not always considered a lucky day, the day you get thrown into a jail cell, but this was the case for my husbands great great great great grandfather Peter Lindgren. One night in March 1806, he was sitting with his brother-in-law Axel Ahlqvist and wife Anna Margareta Holm, at an inn in Kristianstad, drinking. Exactly what happened that night, we don't know, because no one told anything in the following trials, but somehow, they decided to break into another inn on the other side of the road. Inside that inn was a rag picker named Anders Norlin and some kind of a fight begun. As it turned out, Norlin got badly injured, and died a couple of days later. The other three got arrested and charged with murder. They all got convicted, and the verdict was appealed again and again. Finally, it came all the way up to the King Gustaf IV Adolf. A long the way someone had found a precedent that said that since only one life was taken, only one needed to die for the deed, and since noone of the accused confessed, it should be decided who by rolling the dice. They rolled two dices in order and Peter was luckym he rolled the highest sum and his life was saved. Axel and his wife, on the other hand, had rolled the same sum, and had to roll again. Anna Margareta rolled first and got two sixes. Axel didn't manage to roll the same, and hence was sentenced to death. He was later executed by beheading. Peter and Anna Margareta both were sentences to life in prison, and Peter ended up on The Fortress of Karlsten. This was seen as the hardest punishment possible in Sweden at that time, since the prisoners had to work really hard to build and maintain the fortress. The life on The Fortress of Karlsten was very rough, and many prisoners died from diseases or the cold. The photo was taken when we were at The Fortress of Karlsten in 2019, and it shows a cell. Doesn't really seem like a nice place to stay! In the year 1808 an epidemic of some kind started to spread among the soldiers on the fortress, and the prisoners were ordered to care for the sick, bury the dead and clean up after them. Very likely, Peter got infected by the disease. He passes away January 28, 1809, and the reason for his death is said to be fever. Who really killed Norlin was never clarified. Not even when Axel was promised to a last Communion before his execution, if he only confessed, did he do so. A person was executed for the murder, but was it the true killer? It seems likely according to the sources, but nothing was proven. Anyway: Chance was the judge in this case.

Reactions: vickyday
Wow, love the dice and the picture of the doorway, interesting where your research led you!
Oh my gosh! What a family story to discover!! It indeed looks like an ugly and uncomfortable place to be condemned, much less, to the untoward demise of the one man. Rolling dice? Now that is a new one to me. Wow, you'd want to have a good roll for sure..truly a roll of your life. So interesting to read.
So very interesting, Eva! Love the details you have written and the mystery of sorts behind it all! GREAT photo of the cell, too! Love the addition of the dice!